When Opportunities Come Knocking: Catching up with Josh Durham 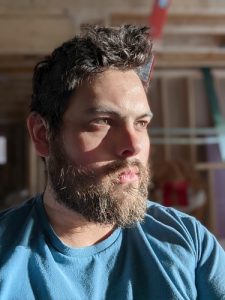 You can never learn too many skills.

Josh Durham, a professional performer, service work aficionado, and carpenter with a robust creative background, is a perfect example of someone who is continually open minded to lifelong learning—a valuable asset in really anyone, but especially in actors and performers. We recently caught up with him, and he shared a bit about his passion for creative trades and how he has navigated the twists and turns his career has taken since the pandemic.

“Everyone needs to be in a creative endeavor at some point in your life,” says Josh, a now-carpenter and voiceover actor who originally developed his theatre roots while building sets with his parents and performing at his church’s annual musicals. In fact, Josh personally witnessed the way creativity affected his family at an early age. Because his older brother dealt with dyslexia and coordination difficulties as a child, Josh’s parents were advised by a doctor to put his brother in dance classes—and young Josh used to watch him tap dance and make noise with his feet. So, of course, he wanted in too.

Josh’s creative pursuits and professional endeavors have taken on many forms since those early days. What began as set design and performance for his church’s productions turned into an active role in the success of his high school speech team (winning state three out of his four years) and a paid theatre internship in college at Elmhurst University—as well as professional and community theatre involvement at BrightSide Theatre in Naperville and Playhouse 38 in Geneva. Josh went back to coach the speech team at his alma mater, Downers Grove South 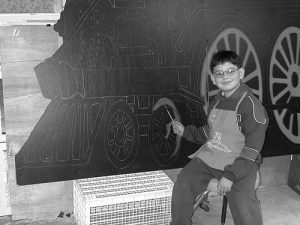 High School, for five years—and during three of those five years, the team won the state championship. After graduating from North Central College with a bachelor’s degree in communication as well as minors in theatre and marketing, the graduate took a job as a travel consultant for Bob Rogers Travel—a niche agency that specializes in large group travel for bands and choirs. Something that especially stood out to Josh during his time with this company was its emphasis on service work, which was an aspect of life that he grew up prioritizing through mission trips with his church and volunteer community theatre at Playhouse 38.

While Josh has loved working in the entertainment, travel, and education industries, these sectors were hit hard by Covid, and over the course of the last year, he found himself taking on a new and exciting opportunity—carpentry. “Sometimes the opportunities that come knocking are not necessarily the ones you’ve considered, but it was a leap of faith. Because of my background in acting, I have a certain adaptability. I follow my gut,” Josh shares. While the new job took him six hours away from his home and he had to adapt to a remote environment as well as a fresh set of skills, he’s always had a passion for working with his hands…and plus, you can never learn too many skills. “As an actor, experiences are the lifeblood of performance…I’ve developed even more creativity,” Josh describes his personal evolution since stepping into carpentry. “I have a better creative sense, so to speak.” Sometimes, an open mind and a willingness to learn new things are some of the most valuable assets you can possess—and Josh credits much of his own confidence and adaptability to his years on stage. 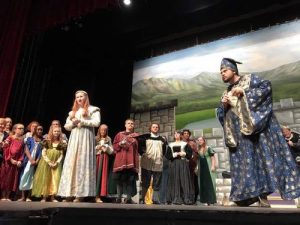 In fact, if he could tell his teenage self one thing, he’d encourage himself to develop that same kind of open-mindedness toward geometry in high school—because he sure has used it quite a bit in his career! Actually, he’d tell his younger self a few things…the other pieces of advice he would include are to not be so hard on himself, to not take himself so seriously, and to trust his gut as well as take leaps of faith. Oh, and we can’t forget the iconic, “invest in Zoom!”

When Josh isn’t at his day job, he’s doing voiceover work for video games, animation, books, and industrial work…he even does that iconic voiceover work for medication commercials, clueing the audience in to the potential side effects. And in his downtime after long, nine-hour workdays, Josh is usually reading or self-reflecting through writing, as well as keeping in touch with his community back home.

Even though Josh is quite accomplished in his career and proficient at personal development, he humbly describes himself as an average Joe who starts his day “one pant leg at a time.” He recognizes that he wouldn’t be where he is without the individuals who’ve poured into him, and he says, “like anyone else, I am the sum of my experiences and a reflection of the communities I’ve belonged to.” It’s no wonder service work and the arts are so close to his heart. He is who he is because of these things, and in fact, he says “humanity comes from the arts.”

If we take those words seriously—that humanity indeed does come from the arts—then it’s extremely important to cultivate creativity in our personal lives while also prioritizing arts in our schools and communities. But unfortunately, anytime budget cuts come on the scene, the arts seem 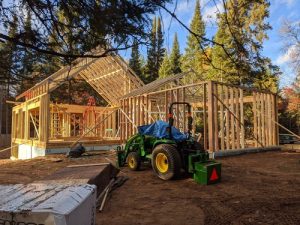 to be the first to go. Josh says, “If theatre and service work have taught me anything, it’s that we have to work together and for each other if we ever want to get anything done.” There’s so much to be done in the coming months and years as we transition into a new normal, and it’s vitally important we keep the arts as a priority in our communities. Additionally, Josh highly encourages performers specifically to not only pursue creative endeavors in one way or another, but to go to trade school in order to further their career. “The trades are not going anywhere,” he says. “I would 100% encourage those that perform to also work backstage. And I would also encourage theater students to go into trade school. Having other skills doesn’t limit you, it only expands your possibilities.”

So to anyone reading, we encourage you to pursue creativity and lifelong learning. Be open minded to exploring a new skill set or trade that could intersect with your career in a positive way—even if it seems totally unrelated at first glance. Learn new things and develop yourself while pouring into the communities around you. And remember, you never know what could be your, “hey, pay attention in geometry” moment. Every opportunity and every skill counts.