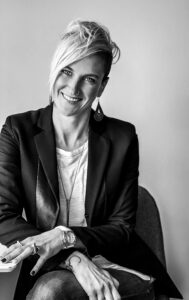 Photographer Leigh Loftus hasn’t exactly been sitting idle during the Covid-19 pandemic. In fact, she used her downtime to build an entirely new business venture; an online course called The PHONEtography Fix.

“The PHONEtography Fix teaches the restaurant industry how to create standout imagery where it matters most–the digital world–using nothing more than the tool they’ve always got on them–their cell phone,” Loftus said.

If the pandemic taught restaurants anything, it’s that quality digital photos of menu items are no longer an option. They are vital to a restaurant’s survival.

“Think about it,” said Loftus, “anytime you’re looking for a new place to go out, the first thing you do is look up the options online. The very first thing you look at before reading a review is the photos. Then you may or may not go on to read the reviews.”

Her idea for the course came about in 2019, when she was invited to speak at a conference for hotel chefs on how to take better photos of food and beverage.

“As I began working on that presentation, it occurred to me just how important this could be for the restaurant industry as a whole. Once the first wave of shutdowns happened in February 2020, it really enabled me to focus my energy and time on bringing this new vision to life.”

Loftus, who now resides in Minneapolis, studied photography at the School of the Art Institute of Chicago and graduated in 2009. Her interest in food photography sparked in 2010, when her hairstylist asked her to photograph her salon at the Palmer House hotel in downtown Chicago. The director of food and beverage happened to be there.

“He asked if I’d ever photographed food or had any interest. At the time, I genuinely had no clue that food photography was a thing, so I was interested and intrigued.” 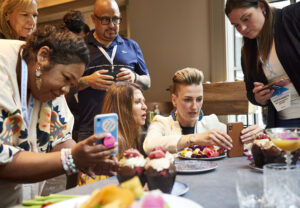 Having never shot at a high-end hotel, used professional lighting or even charged for her services before, Loftus recalled her first food shoot being a lesson in stress management.

“I was mentally back at square one with photography,” she recalled.

“I was literally pointing, shooting and hoping that the image would turn out, and I had nothing to compare it to. No Instagram, no foodie photo groups, and I never even considered referencing a cookbook. So, all I had to go off of was my gut. I would ask myself, does this look like I would eat it? If the answer was ‘no’ then I would keep pointing, shooting and hoping the next one would turn out. Keep in mind, the food in front of me was gorgeous. I simply didn’t know exactly how to photograph it in order to show that.”

Her hard work paid off. The director liked the photos and wanted to hire her again.

She spent the next few years growing the food and beverage side of her photography business. When she wasn’t covering weddings and portraits, she was cold calling restaurants to “either work with them or simply learn from them.”

Though the need for strong imagery and multimedia within the food and beverage industry had increased substantially by 2014, Loftus noticed that cost and budget issues often prevented restaurants from hiring photographers. Changing her business model to a subscription-based version was her solution.

“That worked well for everyone as they could include it in their budget, and I, as a freelancer, was able to have a budget as opposed to living month to month.”

As her business peaked in 2018, Loftus began speaking at various culinary events about cell phone photography. And the idea for The PHONEtography Fix was born.

Loftus’s mission? “To teach my customers and beyond exactly that; how to use their cell phone’s camera to create the imagery they need daily, and how to do it as a professional would.” 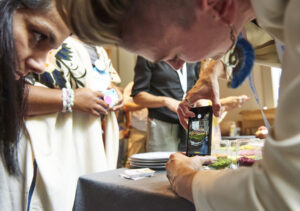 urse begins with four sections under the umbrella, PHONEtography Fix. They include PHONEtography 101, light skills, editing and “Dead Plates to Hot Cakes!”, which explores the small details that can make a

world of difference in the quality of a photo.

The Filter Cure and Editing Essentials follow–the latter of which takes an in-depth look at Lightroom, a tool that has become an industry standard.

The course is approved by the American Culinary Federation, and students pay a flat monthly membership fee of $27 so that they may take the course at their leisure.

“I’ve often said I’m grateful for the quarantine time because it truly was a gift that allowed me to learn all of the inner workings of building an online course. There was a lot to learn. There still is. But had I not had the quarantine time to work in, this would have taken much longer to create.”

Loftus is also bringing her course into the art world. She will be a featured artist in a larger series hosted by 3 Bosses this July. Her exhibit, which will be available to view both in person and virtually, will include a fresh series of food photos shot entirely with her phone. The unique spin will be in the information cards.

“We’ll provide a QR code for the viewer to scan to be taken on an educational journey, learning the steps I take to shoot the piece and the tools I used in the smartphone camera to get there,” she said.

When she’s not working or donating her services to charitable causes like The Greater Chicago Food Depository or the Boys and Girls Clubs in Minneapolis, Loftus is reading. Business and personal development books are her favorites.

“Mindset,” by Carroll Dweck, “was single-handedly one of the most eye-opening books that I’ve ever read.”

“In my 20s I was always in a hurry, always thinking if I wasn’t working then I didn’t deserve time off.”

Now 33, she regularly takes entire weekends off, a shift her inner circle appreciates.

“Most Saturday nights are spent with friends…we’re typically spending that time with people we care about, making memories and always…always enjoying a delicious meal!” 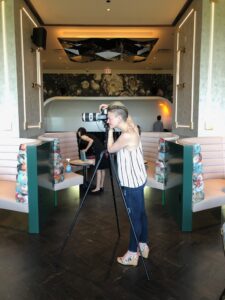 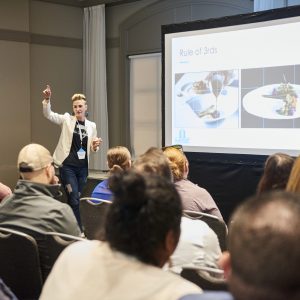 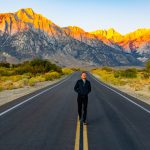