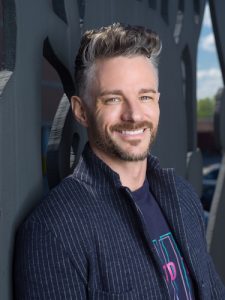 “You must be the change you wish to see in the world.”

This simple yet profound proverb from the lips of Ghandi is the personal motto of Robinson Elsdale, co-founder of Civic Tees—a politically charged t-shirt company with the goal to address humanitarian and environmental injustices running rampant in the States. Elsdale, who founded the company with Autumn Pippenburg in 2020, says “The aim of Civic Tees is to address some of these deep-rooted diseases that, sadly, still affect America like a plague.” Some issues at hand include racism, homophobia, and sexism, as well as wealth inequality, global warming, and the need for criminal justice reform.

These injustices are close to Elsdale’s heart, not only because he’s a caring person who has the integrity to speak up against wrongs in the world, but because he was raised in a home where advocating on behalf of others was exemplified. While growing up in London, Elsdale used to attend teacher union protests with his mum, advocating for better salaries and benefits for teachers. About his mother, he says, “She was a nurse and has just always been a very open-minded, non-judgmental person [who believes] that people are people—irrespective of age, race, color, gender, and sexual orientation.” As a young teen in the melting pot of London, Elsdale also saw firsthand the way many of his friends who were people of color were mistreated by the police, even when they did nothing wrong. Witnessing such profound need for reform at a young age deeply impacted him, so he’s chosen to do something about it over the course of his life. He says he’s all about living something out rather than just talking about it—essentially, walking the walk instead of just talking the talk. 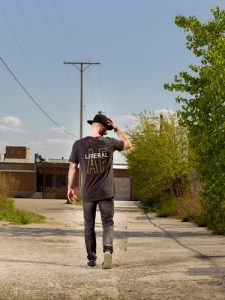 Ranging from tees that say, “Lift Others Up,” to “Gay, Gay, Gay AF,” to “Black Lives Matter,” the company takes a progressive stance that stands up for basic human rights. “America’s got a lot of things that it’s got to work on in order to make life better for the humans that reside within this country,” Elsdale shares. So, what better way to make a stand for what you believe in than to wear it across your chest? Clothing is one very tangible mode of expressing ourselves—of making a statement about ourselves. So, may as well do good with that statement.

And, not only do these t-shirts take a stand for justice and lifting others up, but sustainability is also taken into account when producing them. Civic Tees uses a direct to garment printing method, which is far less wasteful than the age-old screen-printing technique. With direct to garment printing (DTG), the amount of ink used is just enough for the print job at hand, whereas traditional screen printing often wastes a good amount of ink. Printify is the company they work with, and the t-shirts are made to order—again, so as not to be wasteful. And because environmental justice is one of the cornerstones of Civic Tees, it only makes sense that the company would be sustainable in its design approach. After all, the fashion industry is the second largest polluting industry on the planet, runner-up to oil. So, it’s refreshing to see a clothing company that’s both directly and indirectly taking a stand against that. 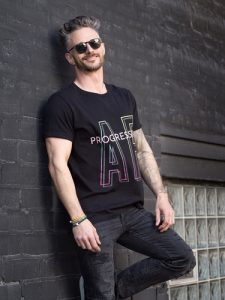 Not only are the t-shirts responsibly made without waste, but Elsdale and Pippenburg have chosen to keep their profit margins small. The goal of the company is to make a change and keep the shirts accessible to anyone, rather than up-charging by ridiculous amounts and alienating entire classes of people. So, you’ll see that many of the pieces are listed for prices such as $18.78 or $13.82, rather than your typical $30-$40 price points. Elsdale shares that he and Pippenburg determined their reasonable profit margins and stuck with them instead of rounding up to the nearest dollar unnecessarily. “The t-shirts really are about creating a movement…you know, creating a statement that change is not only necessary, but it is coming,” he says. So much more meaningful than making a few more cents on each piece.

Ultimately, Civic Tees’ products are meant to make a statement. They’re made for the wearer to show support for those who are marginalized and/or oppressed. Elsdale expresses, “I want customers who purchase and wear Civic apparel to know that they are saying ‘I see you, I hear you, you’re my equal, I stand with you.’” In other words, being the change they wish to see in the world.